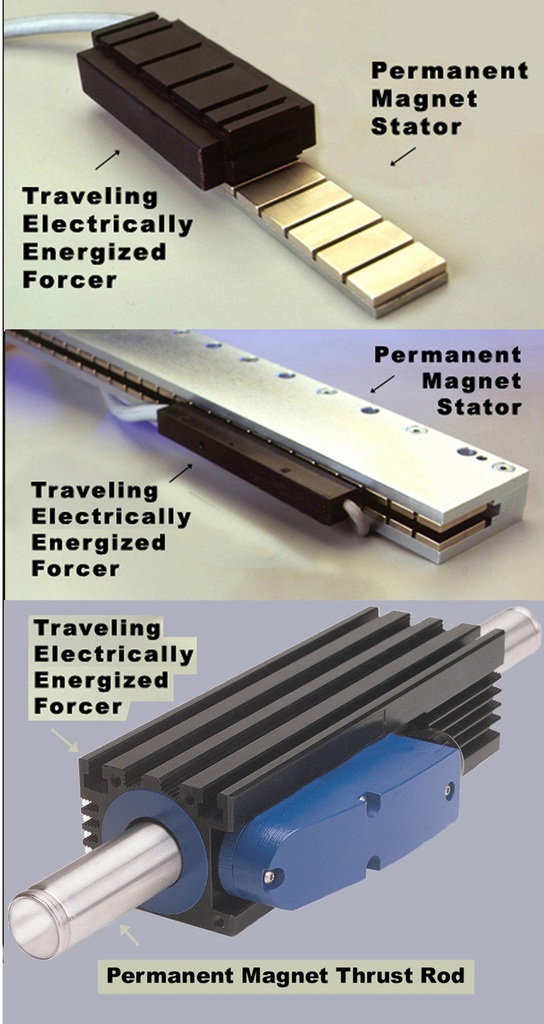 Different manufacturing groups have specialized in one or another of three basic linear motor configurations: Flat bed, U-Channel, and Tubular motors. Each motor has its intrinsic benefits and limitations. Drawbacks specific to one motor type can often be sidestepped by using either of the two alternatives.

Tubular linear motors are rugged, thermally efficient, the simplest to install and they provide drop in replacements for ball screw and pneumatic positioners.

The tubular motor’s permanent magnets are encased in a stainless steel tube (thrust rod), which is supported at both ends. Without additional support, load travel is limited to 2-3m depending on thrust rod diameter.

Vertical operation is not a barrier in linear actuator applications as an electromechanical brake option will hold load position when drive power is removed. The brake also protects against damage in event of power failure and shutdown.

Applications that demand rapid repetitive motion can exploit the linear actuator’s high bandwidth to achieve twice the throughput available with alternative solutions. Machines that maximize throughput by operating without stopping the material flow. These motors accelerate to synchronise with material flow, travel at material speed to initiate the process and after completion, returning at high speed to its starting point awaiting the next round-trip cycle. Throughput, in such applications, is directly related to the units forward/reverse excursion time.

Tubular linear motors lend themselves to productivity doubling applications with two or more independent Forcers operating on a single Thrust Rod. Each Forcer can travel fully independently of the other. One Forcer can then load, for example, while the other unloads. The technique can double throughput by lifting items two at a time from a fast travelling conveyor, separate and place them with precision on a second conveyor. Try this with a ball screw positioner!