WIRELESS SENSORS are offering design engineers reliable ways of detecting vibration, heat and other potentially damaging faults, including loss of pressure, in some of the most challenging industrial applications, however remote. Mark Jamson looks at the options 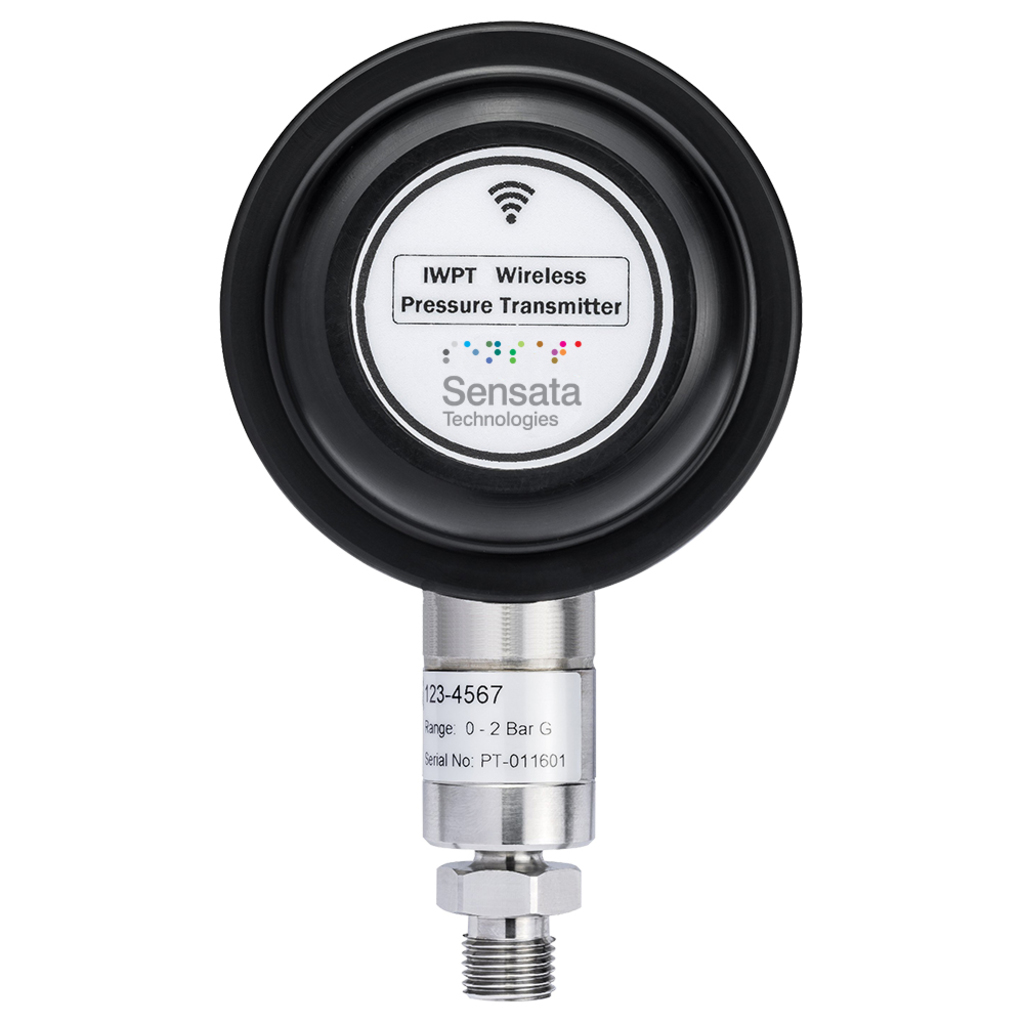 Conventional hard-wired solutions are not always convenient, or practical, which has accelerated the development of wireless solutions. Wireless devices are quick and easy to install, without the need for expensive cabling, and bring solutions to applications that previously might not have been possible.

Whereas early wireless systems presented challenges with reliability and performance, often associated with battery life, these challenges have long since been overcome with products whose integrity is no longer in doubt. And they are being deployed to resolve a diverse range of mission-critical challenges across an equally diverse range of industrial applications.

Take, for example, the case of a well-known automotive manufacturer, renowned for its high performance and luxury cars. Cost efficiency is maintained by having a production line that is ‘always on’. Put another way, any unintended interruption can be expensive. So when this particular manufacturer had a problem with the machinery that moves the chassis down the line, it had to act fast. The motors were failing, bringing the line to a complete halt.

An investigation was launched to discover the root cause of the problem. Vibration may have been the reason, but it did not give the whole answer as to why the high-resistance joints were failing.

These wireless sensors were installed in the production line of an automotive manufacturer, to monitor temperature at three phases of the motors’ connections. Wireless temperature sensors are convenient and growing in popularity, as they offer the same precision as you’d expect in the wired sensors.

The simple installation of a series of wireless sensors throughout the line to monitor motor temperature had an immediate effect. Data from more than 500 motors was collected and transmitted wirelessly through an IoT gateway to a cloud-based server using MQTT packets. The data was then logged into an SQL database and presented to the customer via web SCADA on a bespoke dashboard. The ‘packets’ included serial numbers so that the information was matched to each specific device. 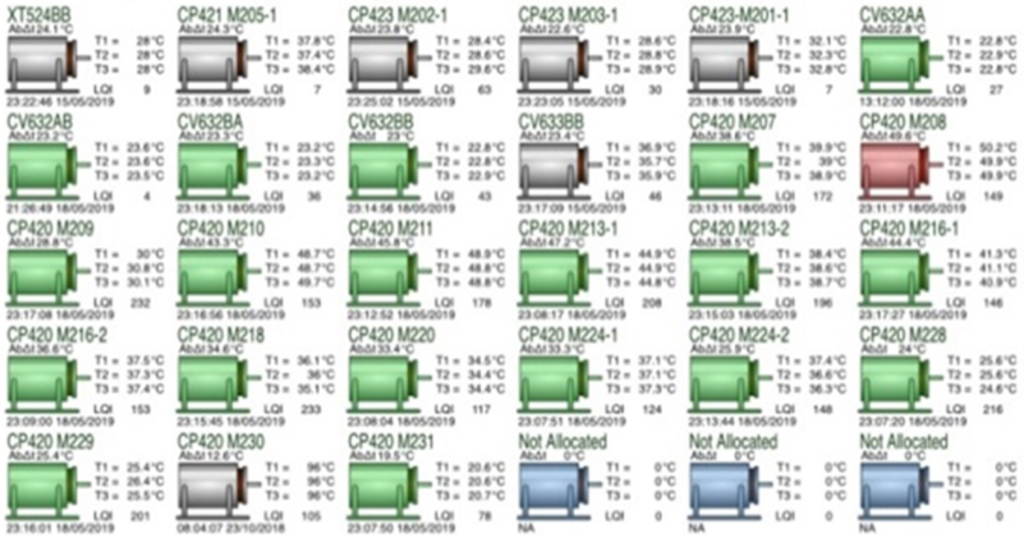 This dashboard shows the performance of every motor on the production line of an automotive manufacturer in real time. It is color coded, so the production manager has total visibility on any potential issues and react in a timely manner without coming to a production downtime.

The dashboard illustrated the performance of every motor on the line, in real time, and was colour coded so the production manager had total visibility of any potential issues. Red indicated that urgent action was immediately required as the motor was on the point of failing; amber signalled that a motor was struggling, and remedial action was needed. Each alarm was linked to the current ambient temperature to reduce the likelihood of false alarms.

The implications in terms of improved fault diagnosis and preventative maintenance are obvious, and in this particular application, the customer calculated that it saved c€2.5 million in production downtime.

Another well-known business, a global engine manufacturer, had an altogether different challenge on its manufacturing line involving a hydraulic fixture.

The hydraulic fixture was in effect a clamp (used in preference to a manual clamp) to keep an engine part in place while it was precision tooled. Constant pressure in the clamp was therefore essential as even the slightest movement of the part could lead to a costly mistake and the part being cut in the wrong place. A more dangerous scenario could also be imagined in terms of the part breaking loose and the health and safety risk that presented.

In this example, three wireless sensors were embedded within the fixture to ensure a constant pressure. A hard-wired system was simply not practical or desired, since the fixture was then rotated at speeds of up to 500rpm. The sensors were integrated such that if any variation in pressure was detected beyond a set threshold then the machine tool would automatically shut down to avoid potential damage to the engine block.

These wireless sensors from Sensata/Cynergy3 are offering design engineers reliable ways of remotely detecting loss of pressure in some of the most challenging industrial proximity or remote applications.

In much the same way as in our automotive example, data from each of the sensors was collected and transmitted wirelessly through a gateway and presented on a bespoke dashboard. With zero errors, the installation has been so successful that the solution has now been rolled out to the company’s global manufacturing operations.

It is not just in ‘traditional’ industrial manufacturing environments that wireless sensors are demonstrating their value. They are also proving essential in remote installations such as solar farms.

Because of the high currents generated and exposure to large temperature and humidity variations, solar farms are particularly prone to fires caused by high resistance joints. As these joints increase in temperature, micro arcing and more advanced arcing may start to occur. In severe cases, arcing may lead to electrical fire, resulting in a safety hazard and damage to expensive equipment.

Typically, high resistance joint connections are monitored periodically by a maintenance team, but this has obvious drawbacks. It means they have to be physically onsite, on locations that are often remote, with all of the associated cost and inefficiency that this brings. Even if such visits are essential, for example for basic maintenance such as panel cleaning and maintaining the external environment, there is usually little or no time to consider the root cause of any motor failure. Although the use of thermal imaging to look for heat spots is a possibility, this poses health and safety issues which will become more problematic as the market migrates to more dangerous, high voltage (1,500V) systems.

Even if thermal imaging is performed regularly, however, it does not give real time or predictive data. The scarcity of data makes it harder to analyse trends and predict when a joint may fail. This is where wireless monitoring has an essential role to play.

Wireless digital sensors, installed as near to the actual termination as possible, provide real-time access to temperature data from the solar farm terminals.  A wireless transmitter is then used to transmit the digital temperature data to the IoT gateway in the same way as previously described. Similarly, a dashboard presents alarms based on the traffic light system which can be linked to SMS or email alerts, notifying the solar farm management team immediately so that they may take corrective action and avoid failure. Because the data is continuous, trends can be identified over time to determine in advance what causes a motor to fail and how it can be prevented. Predictive maintenance can therefore be planned accordingly with all of the benefits this brings.

However robust the design, motors will continue to fail over time. Vibration, as stated earlier, is a principal cause of failure, alongside poor installation and maintenance. Manufacturers are well-versed in monitoring vibration but, what has more recently changed, is the way that data is captured, stored and analysed; this is where wireless devices have a critical role to play.

Because the devices are wireless, they can be installed close to the termination, and the data captured in real time. Analysis is possible at the edge, rather than conducted after the data has been logged back at the PC, as would previously happen. This edge analysis facilitates a more efficient operation, without avoidable interruptions.

Manufacturers like Sensata Technologies, are constantly innovating in this space, delivering full-stack solutions or a single sensor at the gateway. Flexibility is the key: in thinking, in product selection, and in not being restricted to a proprietary protocol or software. Being ‘solution agnostic’ – meaning that a supplier can deliver a range of wired analogue sensors through to wireless digital devices – allows the supplier to propose an appropriate solution which considers each customer’s individual requirements.