A team of apprentices at Honda of the UK Manufacturing (HUM) set up not one, but two, Universal Robots to create their own version of Countdown’s Rachel Riley for the company’s Technical Festival. 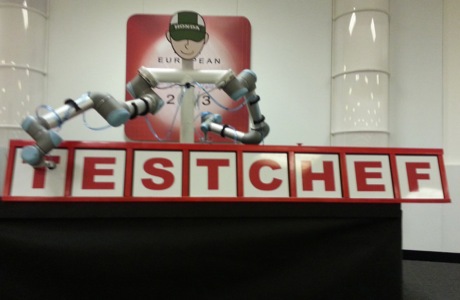 Programming a brand new conventional robot to perform a pick and place sequence would typically require considerable time investment and even the services of an expert. To integrate a second robot – so the two would perform that task in tandem – takes the complexity to another level of magnitude.

Yet for a team of apprentices at Honda of the UK Manufacturing Ltd (HUM) , all it took was a short training course to give them the necessary skills to set up not one, but two, Universal Robots to create their own version of Countdown’s Rachel Riley for their company’s Technical Festival. The HUM Technical Festival is an annual event, introduced to allow engineers throughout Honda in the UK and mainland Europe, to showcase and share technological discoveries and developments.

The Swindon site has recently invested in a Universal Robot from R. A. Rodriguez that is currently being assessed for a variety of applications and clearly it attracted sufficient attention to command an important role in December’s Tech Fest opening ceremony.

Supplied and supported in the UK by R. A. Rodriguez, the Universal Robot is a versatile robotic arm that provides six axes of movement,  is quick to install and can be easily moved around the factory. The intuitive Polyscope software and user interface is exceptionally easy to learn.  Even in the hands of an operator with little or no programming experience, the robot can be set up to do simple tasks very quickly.

HUM engineers were initially introduced to the Universal Robot by visiting the R. A. Rodriguez stand at the TOTAL exhibition in 2013.  At the show, the ease with which HUM could potentially integrate the Universal Robot itself was demonstrated.  This, as well as case studies of successful installations at VW and BMW, led to HUM ordering its first UR10 robot in summer 2013.

At its Tech Fest, HUM in Swindon wanted to demonstrate these qualities to visiting colleagues and opted to integrate two, Universal Robot UR5 units to create a torso with synchronised robotic arms.  Its purpose was to re-arrange the letters comprising the word TECHFEST, in the manner of the popular TV show, Countdown.

R. A. Rodriguez and Universal Robots provided the robots and the necessary advanced training for this demonstration. With less than a week of training the HUM apprentices were able to programme the robots in situ and on the day, the Countdown feature proved a great success.

Although on this occasion the units were programmed to perform a simple pick and place sequence, the Universal Robot can be easily integrated with other machinery and systems, including vision technology where R. A. Rodriguez can offer standard packages by working with vision partner specialists.

"We were delighted and proud to be invited to be part of this prestigious in-house event,” commented Andrew Mason, Automation Systems, R. A. Rodriguez. "It gave HUM a great opportunity to demonstrate the significant production benefits of the Universal Robot concept.”

See a video at: http://www.youtube.com/watch?v=hYpntFSaec4