Plastics specialist igus has developed a new tribo-polymer filament for 3D printers, specifically for engineers who wish to create structurally robust prototypes or small batch components for test in real-world applications or solutions. 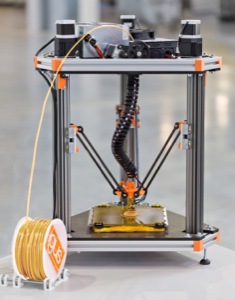 Suitable for use with any 3D printer that has a heated nozzle, print bed and uses ABS filaments, the material is said to be up to 50 times more  resistant to wear and abrasion than products made from conventional 3D printer materials, such as ABS and PLA.

"The flexibility of using a 3D printer for prototyping real useable components allows designers far more freedom in the creation of both intricate and simple shapes for workable parts used in motion applications, such as in bearing locations," says Rob Dumayne, director, at igus. "All of our standard igus bearing products are available for download in STL format and can be used directly as input data for printing replacement parts. We have also designed some innovative 3D models as reference designs."

The new tribo-filament has been tested extensively in the igus lab. Two different materials in two different diameters are available; iglidur I170, which comes in yellow, has a better linear wear rate than I180, which comes in white. iglidur I180 is more flexible than the stiffer iglidur I170 and can therefore achieve a higher bending radius for faster printing speeds and has a slightly higher processing temperature. Both printer filaments, the iglidur I170 and iglidur I180, are available in diameters of 1.75 and 3mm.